At Painters Inc., we’re committed to using the best tools and techniques for adding value to our painting services. Part of the reason we’re considered a go-to painting contractor in the Chicago area is that we offer premium services at a competitive price, and we’re continuing that ethos with the introduction of vapor abrasive blasting, which more effectively prepares surfaces for paint than sandblasting can.

In fact, vapor abrasive blasting, which is also called wet abrasive blasting because the process involves water, has become a preferred method for removing residue, contaminants, old paint and other materials off surfaces.

The reasons, why we use wet blasting for painting projects

Once a process used in preparing surfaces for painting has proven benefits, Painters Inc. is quick to adopt it, which is the case with wet abrasive blasting. The following are the top reasons it’s now part of our process:

What is vapor blasting and what is it used for?

Liquid honing, vapor honing, vapor blasting and wet blasting are all terms used when referring to wet abrasive blasting. The process utilizes water vapor, an abrasive grit, which is also called media, and high-pressure air, which are blasted out of a nozzle onto surfaces. 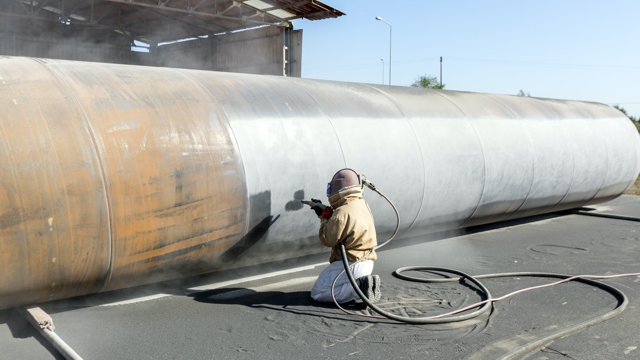 There are several reasons why this method has become so popular with painting contractors, but one of the top reasons they use it is because it leaves a finer finish, so when the paint is applied, it looks better and lasts longer. Vapor blasting is also popular because it is a non-aggressive means of preparing surfaces for paint and is faster than sandblasting.

The process is similar to sandblasting as the abrasive is propelled at high speeds against the surface, but with the use of water vapor, much less contaminants are produced, making it more environmentally friendly, but also cuts way back on clean-up, which equals less cost for customers. Unlike sandblasting, wet blasting actually cleans the surface, providing exceptionally clean results.

Contractors have taken note of wet blasting and are adopting the process at a fast pace. One major reason is for the safety of painting crews and anyone in the area who might breathe in the dust kicked up during the process of removing old paint. Lead-based paint, which is a highly toxic material, is found in many old buildings.

When painters are tasked with removing old paint, using the wet blasting method ensures that less particulate matter is strewn into the air.

When painters go into a job knowing they will encounter everything from concrete splatter to stains and other types of stubborn deposits, vapor blasting/wet blasting is the process they can rely on to make quick work of it, regardless of the type of surface they’re working with, including all types of metal, glass, plastic, wood, concrete, ceramic and vinyl.

The advantages of using wet blasting are so numerous that it’s no wonder that more and more contractors are implementing the process. At Painters Inc., we’ve identified some of the most advantageous outcomes, which are listed below:

Water vapor helps to contain any contaminants being displaced from surfaces, which keeps the area much cleaner than what occurs with dry blasting or sandblasting.

Dry blasting and sandblasting can’t compare to the finishes left by wet abrasive blasting. The water is the key component because it washes away the abrasives rather than leaving them embedded on the surface.

With water and the abrasive coming out of the nozzle at the same time, fewer abrasives are used compared to sandblasting, yet you get better contaminant removal than you do with dry blasting or sandblasting. The less media you use, the less money you spend on consumables.

Sensitive surfaces can’t take the punishment dished out by sandblasting. When a vapor blaster is brought in, usually with a slurry blaster method, the debris can be safely eliminated from surfaces, but at the same time the surface is being cleaned.

When a power washer is used to clean surfaces an abundance of water is wasted, which creates a mess and is difficult to maintain. A vapor abrasive blaster, however, is designed to use a minimal amount of water, which makes clean-up much easier.

Time is money, and when the wet abrasive blaster is brought to a jobsite, surfaces are not only completely cleared of grime, old paint, grease and contaminants – they are also cleaned – all at the same time, which saves on labor costs and helps to finish projects in the desired amount of time.

When keeping the dust to a minimum and saving time are priorities, the wet abrasive blaster is the way to go. Painters Inc. uses this technology and our customers notice a difference.

Dry blasting requires a substantial amount of abrasive to get the job done, and that’s one of the more glaring differences between it and wet blasting. Wet blasting has the advantage here because you’re spending less money on abrasives.

With dry blasting, the abrasive that doesn’t become embedded in the surface is free to float in the air and eventually fall to the ground and on surfaces that will need to be cleaned before being painted. With wet blasting, the water helps contain the particulate, keeping it out of the atmosphere.

The top benefit of wet abrasive blasting is you’ll eliminate up to 92% of airborne dust, while also saving on cleanup and disposal costs.

Dry blasting can damage surfaces much easier than wet blasting. The water is the crucial element that allows the abrasive to do what it is supposed to do, but nothing further, which means it acts as a buffer or dampener. This is also what contains the particulate, which is formed when the abrasive shatters once it hits the surface.

Some question whether the wet blasting method and its dampening/buffering effects might make it less effective on tough jobs, but the key is how the abrasive hits the surface: In the dry blasting method, the abrasive impacts at an angle. The water in wet blasting allows the abrasive to disperse at less of an angle, giving it more opportunity to work on a wider profile, which means it covers more area and doesn’t have a harsh, angled impact. 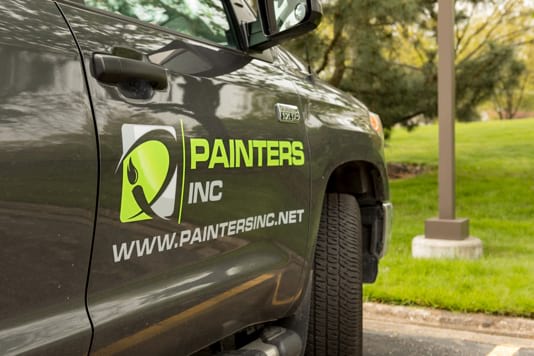 At Painters Inc., our goal is to bring value to every painting project we take on. Each industry we work with has different needs, which means we have to be prepared for just about anything. Incorporating the vapor abrasive blasting technology has helped us step up to all types of projects on many different surfaces.

In many of our industrial projects, we encounter a fair amount of dirt, grime and old paint that needs to be skillfully and safely removed. But the surfaces also need to be clean and paint ready. Our vapor abrasive blasting technique not only removes the toughest stains and heavy grime, it also completely cleans surfaces without damaging them.

This is good news for our clients who don’t want to hire a separate contractor to do a deep clean on their facility before the painting contractor comes in. When Painters Inc. is called to the job, we quickly prep all surfaces and create the perfect scenario for a paint job that will look great and last a long time.

"I want to thank you and your crew for the outstanding job you did in renovating our condo building these past couple of months. From start to finish, it was so easy to work with you in completing such an enormous task. The whole project consisted of redecorating our 4 story building with new paint, tile, trim work, lighting, resident doors and other areas of need."

"I have worked with Painters Inc on a number of projects at my Glencoe home, both inside and out. The quality has been excellent at a fair price. Supervision was top notch, no request was left unanswered and the owner was always accessable. I intent to use them again on new projects."

"And I haven't even mentioned the quality of work, which was superb! The care of our property and the meticulous attention to detail was evident in everything that was done. In addition, your advice during this project saved us money and improved the final look of our building. A customer could not ask for anything more from a contractor."

"Thank you very much for another job well done. The quoting process was honest, fair, and straight forward. The beautiful project was completed on schedule as promised. I especially appreciate the workmanship from all the Painters Inc crew members. I highly recommend Painters Inc to everyone."

There are many painting contractors from which to choose in and around Chicago, but as one with a stellar reputation, Painters Inc. knows that maintaining an edge over the competition is only possible when thinking of the needs of the customer first, and part of that is to consider which technologies will best serve them. Vapor blasting is definitely one component among many that prove we’re customer-centric and focused on providing value.

Painters Inc. is focused on the big picture and the smallest of details, which is how we’ve built our reputation as the go-to interior and exterior painting contractor in Chicago and the surrounding area.

Many of the comments we get from customers after the job is finished are about how amazing their facility looks compared to before we took on the project. Vapor abrasive blasting expertly prepares finishes for paint, which gives that initial extra “wow” factor but also provides long-term value. For more information about our painting services, contact us today.

When on the job
Highest quality work

We conduct every project with a commitment to good workmanship and use only the best products to ensure the highest quality in craftsmanship and customer satisfaction.

Flexible scheduling to meet your requirements

We offer flexibility in scheduling and guarantee completing a job within the proposed timeline to save you stress and money.

We take our role seriously and strictly adhere to industry safety standards on each and every job. All team members are OSHA safety practice and procedures trained, and all employees attend mandatory weekly safety meetings.

From precise finish work to maintaining a clean, respectful work space, our eye is on the details.

Our standards and services are always efficient and safety conscious, and to avoid disruption to your business operations, we’re able to work nights and weekends.

We only use top-of-the-line paint coatings and colors from Sherwin Williams and Benjamin Moore.

We’re ready to meet with you today to discuss your exterior and interior painting needs. We’ll draw up a customized painting plan that meets your unique needs, while also working around your schedule so there is as little disruption as possible to your workplace.